I admit to wanting to get picked up by Adam Growe when I’m on the streets hailing a cab. I don’t mean picked up in that way…but as the host of the highly popular game show I think it would be a lot of fun. Cash Cab takes place inside a taxi that quizzes passengers while taking a ride to their destinations in hopes of earning a few dollars for their trivia answering skills. Adam is the cab driver and game show host. The show airs on Discovery Channel Canada. 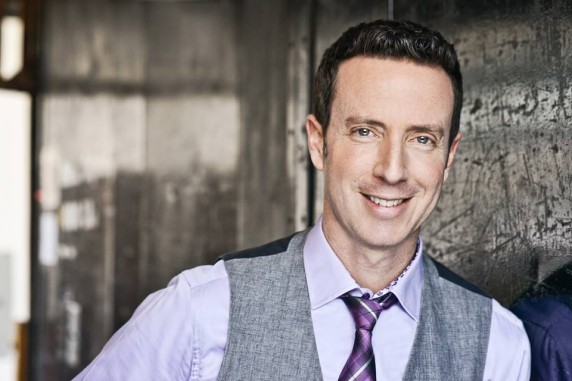 What most people don’t know is Adam’s also one of Canada’s most accomplished stand-up comedians. He starred in his own Just for Laughs Gala as well as Comedy NOW!, on CTV and CBC’s, COMICS!. He was also featured on Comedy Central’s Premium Blend in New York and CBS’s Star Search in L.A. His career also spans into television including YTV’s Monster Warriors, Shades of Black: The Conrad Black Story and has also performed in theatre tours and festivals.

I had recently discovered that Adam Growe will also be hosting the Young People’s Theatre’s 2nd annual comedy fundraising event LOL for YPT: Laugh at the Funny Side of Parenting! The event takes place on Wednesday, February 3, 2016 and will also feature comedic talents of Kate Davis and Chris Gibbs.

We had a chance to chat with Adam Growe and what it was like growing up funny, being a cab driver, and why we should go to this fundraiser. 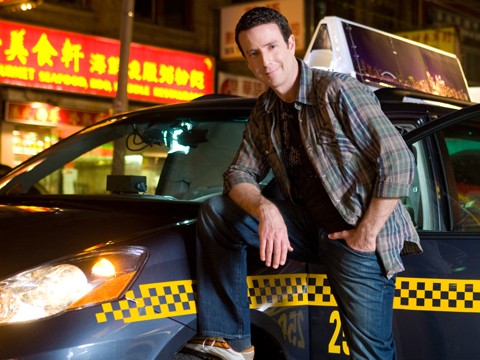 When did you realize you were funny?

I first realized I was funny when I was doing a skit with some friends in Grade 5 at Bayview Community School in Vancouver. It was a classic “summer camp” style skit that involved us repeating the same short scene in different ways, (i.e. fast, slow, laughing, opera singing, etc…). Two of my classmates in the audience were laughing so hard, I thought they were exaggerating their reaction in order to tease me. When I realized they were genuinely enjoying the show, it was definitely that “A-Ha” moment. We went on to do the same skit in a whole-school-assembly and it was a huge hit! Years later, I taught some students that same style of skit for them to use at my kids’ school, High Park Alternative in Toronto. I’m still suspicious, to this day, when people are laughing really hard at my comedy act. I’m pleased to say, they’re not teasing me. Usually.

As a kid, did your teachers think you were funny?

As a kid, some of my teachers might have thought I was funny, but not because I was a “class clown”. I saved my comedy expression for “teacher approved” channels, like extracurricular activities, drama class and student council. While I goofed around on-stage a little in elementary school, it wasn’t until later in high school that I started to “perform” regularly. I was responsible for doing the morning announcements on the school P.A. system and hosting many events. One of those events was the school “Air Band” contest, (which was basically what “Lip Sync Battle” is today). I wrote a lot of comedy “bits” as an MC. There were a couple of teachers who were actually “fans”, and mentioned how I helped them start the day with a laugh, or how they missed me when I wasn’t available to host an event. I was also in drama and performed in a “high school” musical. I had a serious role, instead of comedic, but couldn’t sing worth sh*t. So, my solo songs were given to other students in the cast. That was soooooo funny. Looking back at it now. In a dark comedy kinda way.

The most memorable moment on stage doing stand-up for you?

While I’ve had a lot of memorable moments on stage doing stand-up, including standing “O’s“ at live events, the two that stand out as the most memorable- for being the best- were for TV. (There are plenty of others that are, unfortunately, memorable for other reasons). My first televised comedy experience was for CBC’s “Comics!”. I honestly had barely enough material to fill the 22 mins. It was taped in CBC headquarters in downtown Toronto and I had family and friends in the audience. I was scared out of my mind. It went so well I had to ask them afterwards if my brain was fooling me into thinking it went well. I have to say, it might still be the best TV comedy I’ve ever done. The other TV comedy moment was performing my Just for Laughs Gala in Montreal at the St. Denis theatre in front of 2,000+ people. I shared a green room with Brent Butt and Sean Cullen, and Bill Maher introduced me. Amazing! While it also went extremely well, it is more the honour of getting a JFL Gala. It continues to be the most prestigious comedy festival in the world, and the only YouTube video of mine that anyone seems to watch.

If you weren’t a comedian?

If I weren’t a comedian, my career of second choice might have been the career I started BEFORE comedy. I was a childcare worker in Toronto at a private school and residence for kids experiencing behavioural problems, with an eye on becoming a Social Worker. I was good at it. It was very challenging work, (and I salute those who make their careers in that field). I decided, however, to explore my creative side before committing to the long-term horizon of social work and went back to school for radio broadcasting. I was in radio for 5-7 years before moonlighting as a stand-up comic started to take over my professional focus. Both radio and comedy involve working with many people who arguably experience behavioural problems of their own. So, perhaps I’m still working towards that Masters in Social Work after all.

For Cash Cab (btw, we LOVE playing along) did you go through the process of becoming a licensed cab driver?

For Cash Cab, I had to go through the process of becoming a licensed cab driver in both Toronto and Vancouver. For the first season in Toronto, production on the show started the day after I was to receive my grade in the final exam to get my taxi permit. If I didn’t score 75% or higher, I’d have to re-write the exam in a few weeks. So, there was a lot of pressure to pass and start making episodes. I passed with flying colours, and just like after all of my high school and university exams, immediately forgot everything. Of course, the pressure I was under to become licensed doesn’t compare to the kind of pressure cabbies face in making an honest living. For my insight on what I’ve learned about the cab situation in Toronto (and across the country), please read my post: http://www.adamgrowe.com/index.php/mr-cab-driver/

Have you ever gotten into a cab and a cabbie recognized you from the show?

When I get into a cab and cabbies recognize me from Cash Cab, it’s not only a great honour for me, but a HUGE relief. I was worried, when we were first making the show, that cab drivers who have to make a living doing the job would be put off with a guy like me being the “face” of their industry. Let’s face it, there are not many Caucasian cabbies, so I was self-conscious about the possibility of there being a “distorted representation on TV” factor; kind of like what people said about the lack of African Americans on a show based in New York, like “Friends”.  But, many cabbies LOVE Cash Cab. I believe it was a boon to their business, as they told me stories of passengers talking about the show, pretending they were on the show, and even taking cabs more often in the hopes of being on the show. Not all cabbies recognize me, but those who do, don’t mistake me for anyone other than myself- which is not always true for some of the other people who recognize me in public, but aren’t sure why. #RickMercer

Do you have people quizzing you all the time?

When people recognize me, or find out who I am, it’s not uncommon for them to, a) quiz me, or b) tell me a joke. The latter is less common. Even though I was a headline stand-up comic for over a decade before Cash Cab, many people have no idea I’m a comedian at all. Nevertheless, there’s something about meeting a comic that inspires people to want to tell them a joke. I usually laugh so hard that they think I’m exaggerating my reaction in order to tease them*. (*see above). When people quiz me, it makes me nervous. While I’m a trivia genius, I don’t actually know the answers to EVERY trivia question in the universe. I don’t want to break the magic of being the host of Cash Cab by giving three wrong answers and getting “kicked out”. So, I usually divert their attempts to test my knowledge by asking them how much money they have. I figure, if you’re going to quiz the “Cash Cab Guy”, you better be prepared to pay him for correct answers, right!? My favourite though is when people want ME to quiz THEM when they recognize me on an airplane. That comes to a screeching halt when I ask, “do you have a parachute?”.

The LOL Gala for YPT is coming up and we all need a laugh particularly this time of year…so, tell us, what makes you laugh?

Often when hearing a great joke, or bit, for the first time from other comedians like Kate Davis and Chris Gibbs (who are also on the show) I do get to LOL. It’s one of the fringe benefits of working in the comedy business. But, being a comedian for decades has resulted in my becoming desensitized to humour in a way that means I don’t ALWAYS laugh out loud at “jokes”, even if I think they’re really funny. Fortunately, I still do have a lot of laughter in my life daily, and it’s often the big belly-laughs. These kinds of laughs, however, come from the hilarious “you had to be there” moments you have with family or friends that you, and only the small number of you, understand and laugh at for years to the point of bringing tears to your eyes. So, when you need a laugh, particularly at this time or year, one of the best things you can do is spend time with family or friends with whom you share one of those “inside joke” moments. Treat yourself to the hilarity that annoys everyone else in the room who wasn’t there. Or you could just watch cats freak out from seeing cucumbers on YouTube.

Need a good laugh while supporting one of our favourite theatres in the city? Book your babysitters now for a fun night out. For more information on the LOL for YPT: Laugh at the Funny Side of Parenting hosted by Adam Growe, visit youngpeoplestheatre.ca

Toronto’s restaurant scene continues to evolve and it’s exciting! Our city draws the attention of locals, tourists as well as […]

There’s nothing that really stops dog lovers from getting outdoors all year round. We took a look at exploring more […]

Upgrade Your Brain. Your Future Self May Depend On It!

If you’ve been stalling on your new year’s resolution to expand your digital skills, then it’s time you look into […]