Impossible Arts is a newly registered non-profit arts organization founded by award-winning author Emily Pohl-Weary, who grew up in Toronto’s west-end. Its mandate is to promote creativity, confidence, and self-expression for inner-city youth, through hands-on artistic and literary workshops and events. This organization connects inner-city youth, many of whom don’t feel comfortable in traditional learning environments, with established filmmakers, authors, cartoonists, and hip-hop poets. Impossible Arts programs take place at our host and partner location the Academy of the Impossible, a west-end maker culture community hub.

The latest initiative by Impossible Arts is a reading series called Impossible Words, which “resents culturally and stylistically diverse literature by established and emerging contemporary Canadian writers to all members of the public, and youth audiences in particular.” The reading series launches on September 8th 2012 with a reading by Governor General’s Award-winning poet George Elliott Clark, which will take place at 1:30 pm at the Academy of the Impossible (231 Wallace Ave. [At Lansdowne]).In addition to readings, all of the instalments of the Impossible Words series will feature an audience Q&A with the author as well as an open mic.

Image Seeks Words had the opportunity to speak to writer Mariko Tamaki, who will perform at the second Impossible Words event on September 22nd.

How did you become interested in and involved with Impossible Arts?

I’ve known Emily Pohl-Weary, Impossible founder, for almost ten years now. Back in the day, I wrote a column for her literary magazine, Kiss Machine, called “Ephemera.” I’m a huge fan of all of Emily’s arty schemes. I once drove to Wisconsin and back in a car with Emily and two other super heroes, Daniel Heath Justice and Carly Stasko. It was a crazy mess of a blast and resulted in the comic Skim (with Jillian Tamaki), which Kiss Machine originally produced as a mini comic. 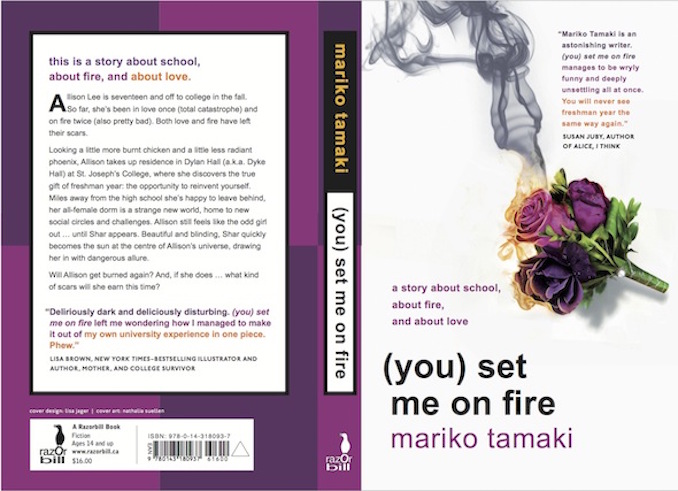 What is it about this non-profit, and the new salon, that inspires the word “impossible?” How is this art impossible, how are these words impossible?

I suppose you could say that being in the arts, and pursuing art, feels impossible sometimes. It feels like such a venture to get your work out there, to get into the small group of people whose work gets published, gets heard, gets recognized. As you get older, I will say, sometimes it feels very impossible.

I’m not sure if I would describe my work as an investigation of the impossible. I do think, though, that I am a big fan of dreams, of the real/unreal. I’m a big fan of real life magic and bringing real life magic into the writing I do.
I’m not a fan of limits. I love those moments when writers, artists, filmmakers, theatre makers, cross boundaries, do things they’re not supposed to do because they’re curious and determined.

I think the impossible is a great thing when you put it in the hands of the curious and determined. Like moi.
How comfortable are you with being described as a YA author? I recently read your “you write for kids” blog post, where you describe writing Skim for yourself and then finding it appealed to a younger audience (and it is a book that I love).

I’m not always sure how I fit into the YA sphere, which is a pretty amorphous space to fit a book into. My last book, (You) Set Me On Fire, is set in University/College, which is outside of the typical setting for YA, high school. I write about sex and drinking and things of that nature. I’m not sure that fits comfortably with the existing version of YA.
Which, of course, is fine by me.

I did this show last night for a group of 600 girls (and a handful of boys) for a magazine launch, and I had the BEST time. They were awesome and inquisitive. I love the idea that young adults are my audience, that I’m writing something for them.

Now that you have a YA audience, do you find yourself consciously writing for that audience more and more?

Absolutely. (You) Set Me on Fire was written expressly to be a YA book. I also just finished (my side of the) work on a new comic I’m doing with Jillian Tamaki, called Awago Beach Babies (First Second/Groundwood Books), which is for readers young and old. I’ve described it as being for young adults and for adults who are a little immature, like moi.

I want to write for young adult audiences, I don’t want to avoid subjects or change the story I want to write because it’s for young audiences. But it’s a balance. I did make the decision, recently, to try to avoid making all my protagonists smokers. Just because it seems to be to be a bit of a crutch and I don’t like the idea of making smoking this central thing to my portrait of teenagers. I mean, I was a smoker, off and on, from 16 to very recently. Smoking sucks. I wouldn’t want to be an advertisement, in any way, for cigarettes.

Kids. Do not smoke. There are so many better ways to be cool that aren’t going to make you sick.

Tell us about your forthcoming piece, (You) Set Me On Fire.

(You) Set Me On Fire is the story of Allison Lee, who has had a string of unfortunate events leading up to her first year of college. She’s been burned, literally burned, twice. And she has this idea that she’s going to go off to college and somehow her life will be different. That she will not get burned there. And the first person, well, second, she meets, ends up being this very intriguing but destructive person, Shar.

So it’s a story about change, about trying to change. And it’s also a story about making mistakes. It’s about mean friends and good friends. About being presented with a chance to make a new life, and how you go about doing that.

What it is about burn scars that work so perfectly as a metaphor for love?

I started with the idea of a fire, which is to say that “fire” was a scene before it was a metaphor. When I was in high school, right before college, I was sitting in a park with a friend, smoking, and she drunkenly accidentally lit my hair on fire. Just a bit. Nothing more than a singe. But what the hell?! Right? I remember at the time kind of brushing it off. Later, looking back, it seemed to be to be kind of a classic picture of me putting myself in dumb situations, hanging with girls who were careless with lighters and alcohol.

I was just kind of a careless kid a lot of the time. I felt the world happening to me. And I wanted to pull that out into a story.

It was later I thought of this idea of fire and the metaphor of the phoenix. How we have this common notion that change can be easy. That you just leap into the flames and emerge, NEW. Which so rarely works.

It also works as this idea of getting burned, which love does. It burns you. Often. And we’re these moth like creatures, we’re Icarus, we can’t help ourselves.

At the best of times, love is heat and not fire. But that’s a hard thing to figure out.

Your work also strikes me as a little bit magic realist, even though there is no specific supernatural goings on.

What makes your stories so weird?

I am weird. I see weird connections. I love weird metaphors. I love seeing faces in food and other intimate objects (which if you follow me on Instagram you’ll see loads of — they are often very creepy). I think if you have an imagination, if you’re willing to see things any which way, it makes life a little magical.

Magic seems to be more and more a part of my life as I get older. I have an ad hoc science club with several friends, and we spent a whole summer Remote Viewing (look it up) and talking about “the future” as we saw it. It was an amazing conversation.

Also, I’m obsessed with the idea of writing a whole book in which unicorns are mentioned in every story. Just saying. Wouldn’t that be awesome?

What is it about the collaborative nature of graphic novels that appeals to your creativity so much?

As an artist I’ve spent a significant amount of time working with collectives. I was a part of several performance collectives as a younger person. I was in Pretty Porky and Pissed Off (which had 5-7 members), the Corporate Wet Nurse Association, and most recently TOA, which I do with my friend Lindy Zucker. I recently made a movie with some friends called 16 Covens (with director Jen Markowitz), keep your eyes peeled for upcoming appearances. I’m currently working on a show and some scripts with Heather Gold, my lovely girlfriend.

I love the way multiple people’s ideas and art can combine in a single work. It’s incredibly inspiring. Also, I just really LIKE working with other people. I like the people I work with and I like the idea that when we hang out we’re actually working, somehow. I like talking about a story and then putting it on the page and getting feedback and moving things around. I love how a character and a place can come out of that conversation. It’s almost always an engaging conversation. If it wasn’t fun I wouldn’t do it.

With regard to comics, I love illustrators and comic creators. Jillian and I have a very easy working relationship. She is such an incredible artist (and when I say that I don’t just mean illustration, because the work she does in the comics we do together goes far beyond “just” illustrations). I can’t wait for people to see Awago Beach Babies (2014!).

I’m currently working on a comic app with an artist named Gillian Goerz. Which I’m really enjoying as well.
What sets you apart as a performer?

Probably all the same things that set me apart as a person. Thank goodness.