Our review of Metroid Dread, developed by MercurySteam and Nintendo EPD, Released on October 8, 2021 for Nintendo Switch. 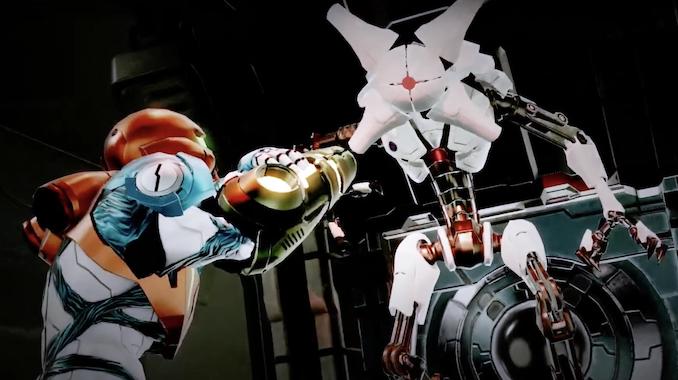 The sixth “main” entry in the Metroid series, and the first proper 2D Metroid since 2010’s Other M.

For better and for worse, it’s the same Metroid we’ve been playing since 1986. 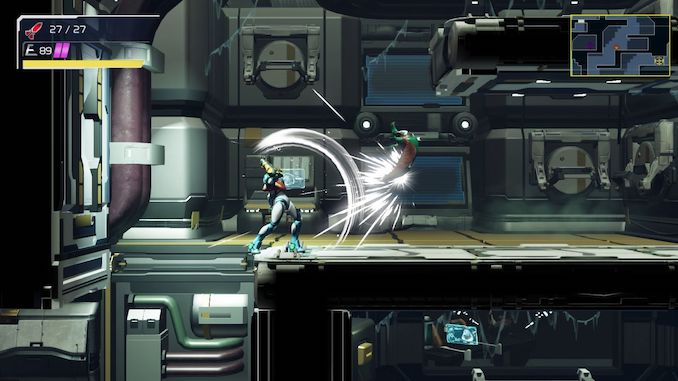 It’s weird playing a new 2D Metroid game in 2021. Not only because it’s been a decade-plus since its immediate predecessor, but because, in the intervening years, Metroid has been so eclipsed by the newcomers to the “Metroidvania” genre it helped to invent. Games like Axiom Verge, Guacamelee!, and Shadow Complex have been “out-Metroiding” Metroid for a while now, even as Metroid carved out a niche for itself with the “first-person-adventure” Metroid Prime series. (Which, incidentally, is slated for a fourth release next year.)

Metroid Dread somewhat remedies this, delivering a satisfying take on the genre while benefiting from a fresh coat of HD paint. But its fidelity to its predecessors comes at a cost, one that players should be aware of before diving in. 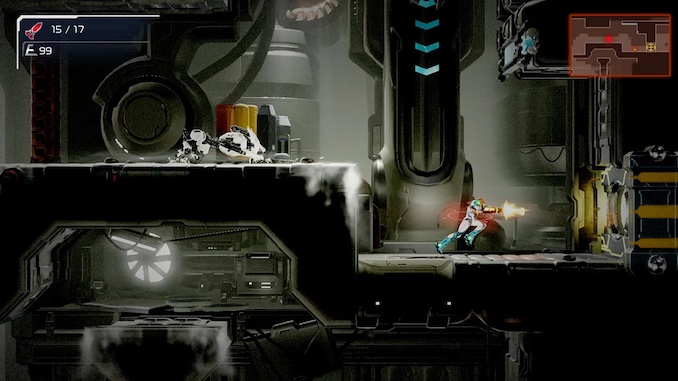 For the uninitiated, here’s how a “Metroidvania” – so named for its origins in the Metroid and Castlevania series – works: playing as a lone hero, you’re dropped into a hostile landscape where enemies are stronger than you, and most pathways are blocked off. Slowly, room by room, you explore your surroundings, finding hidden pathways, uncovering more powerful weapons, and abilities that let you access previously sealed areas.

Metroid Dread is, first and foremost, an exploration game: you’ve landed on Planet ZDR, it’s infested with enemies – some organic, some technological, some both – and you need to figure out a way to buff up your powers and defeat the “big bad” lurking in the shadows. In the first hour, you’re weak, and lost, and overwhelmed. By the final hour, you’re strong, less overwhelmed, though still fairly lost.

To be fair, the core gameplay loop remains satisfying as ever: it’s always fun to spot a locked door, make a mental note of it, then return to it hours later once you’ve unlocked the ability that will pry it open. It’s just too bad the rest of the game isn’t quite up to snuff. 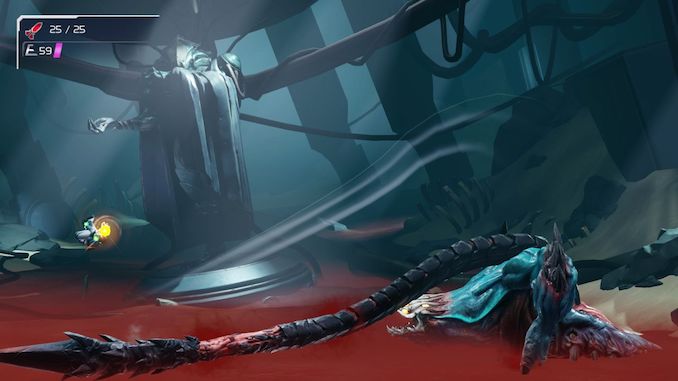 Metroid Dread starts with a big exposition dump, in the form of a too-long string of text that puts Star Wars to shame. There are “Chozo warriors”, “Species X”, E.M.M.I.s, and Planet ZDR, and other nonsensical stuff. It’s Metroid Dread‘s half-hearted attempt to remind you what happened in the 2002 Game Boy Advance title Metroid Fusion, a game that, bizarrely, Dread expects you to have played and remember. Still, that opening is nothing compared to Dread‘s truly awful mid-game exposition dump – delivered in an embarrassingly fake-sounding made-up language, no less – which is so bad I actually laughed out loud. Honestly, storytelling has never been Metroid‘s strong suit, so if you can just accept “big evil aliens cause big evil trouble” as your motivation, you’re going to have a good time.

And Metroid Dread is a good time. It takes the tried-and-true Metroidvania formula, updates it with minor concessions to modernity like more frequent save points and health power ups, and wraps it up in beautifully modern HD graphics. The weapons all look, sound, and control fantastically, and moving through the environment has never been easier. (Samus’s double-jump is still too finicky, however.) Combat is difficult but fair, and the bosses are a highlighight. That said, some of the bosses do go on for too long. There’s one in particular, with a seemingly limitless health bar and an attack pattern lifted straight from Flappy Bird, which is a particularly egregious offender. Last I checked, Flappy Bird sucked. That boss sucks too.

This game also moves at a much steadier clip than past Metroids, thanks to an improved, though far from perfect, map system that tracks your every discovery. Still, Metroid Dread is incredibly bad at telling you what to do next. While it’s decent at funnelling you through a newly-discovered area, it’s terrible at telling you what to do after you’ve claimed whatever lies in wait for you at the end of it, whether it be a new skill, a new weapon, or some other upgrade. Say you’ve unlocked the Morph Ball, the famous Metroid ability that lets protagonist Samus curl up into an itty-bitty little ball. Do you go back to “Zone A” to drop down that little nook you noticed earlier, or should you see what’s up in Zone “B”? I spent way too much time poring over the map, pixel-by-pixel, trying to figure out my next destination, and too often getting it wrong. That’s not something I should have to contend with when other Metroidvanias solved this problem ages ago. 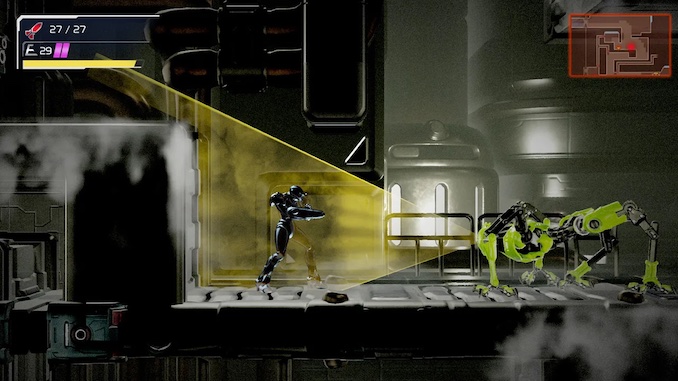 Fun fact: long-running Metroid antagonist Ridley is named after Ridley Scott, director of the original Alien movie. It’s a nice nod to the film that inspired so much of the Metroid aesthetic, even as the series largely avoided anything resembling proper horror. Metroid Dread is the first game to really attempt that, with sections featuring unkillable robots called E.M.M.I.s that stalk you room to room, clambering through vents, landing an insta-kill if they catch you. It’s the “dread” in the title, and the only way to survive these sections is a combination of stealth and speed. And yet…

There are two major problems with the E.M.M.I.s. The first is a major horror no-go: they simply aren’t scary. They look like big robot dogs, akin to something Boston Dynamics might put out, and their design isn’t particularly menacing, not when compared to iconic horror monsters like the xenomorph. The other problem is that there’s zero consequence to failing an E.M.M.I. section. Thanks to generous checkpointing, a failed attempt simply resets you to try again, ad infinitum. Soon enough, the E.M.M.I.s have gone from mildly intimidating predators to seriously irritating barriers to progress. While it’s nice that Metroid finally decided to lean into its horror roots, these sections rarely ever work as well as intended.

Really, that encapsulates the Metroid Dread experience: every time it tries something new, it sort of works, but not entirely. And every time it recreates something old, it fails to evolve in ways that it could have, and which other Metroidvania games have mastered. You’ll get lost needlessly, get stuck fighting the same boss for a few too many rounds, and grow tired of the E.M.M.I. encounters long before you’ve finished your last one. On their own, none of these things are too frustrating, and to be clear, they don’t really get in the way of the core gameplay, which remains solid as ever. But taken together, it’s hard not to be disappointed that Metroid Dread is so much like its 8- and 16-bit forebears. “Just like Super Metroid” is a great back-of-the-box quote, but it’s also a mild condemnation of a series that’s since been overtaken by the many other games it inspired.