Growing up as the youngest of 3 brothers in a Caribbean household, Raz was surrounded by music from a young age and started writing poetry and spoken-word at 16. But it wasn’t until his Sophomore year of University that he found the mic. From that point onward his life-long dedication to sports and academia faded and shifted toward his music career. This re-focusing allowed him to not only develop his craft and new career goals, but to also reconcile the expectations and pressures already in place from his family, friends and community as a young Muslim who seemed destined for “Greatness” – that is if your definition of “Greatness” is synonymous with “Doctor”, “Lawyer” or “Engineer”.

After graduating from Western University, Raz declined his acceptance to a Doctorate Program and left Toronto on a one-way ticket to Germany. The plan was simple; go on a Germany-wide tour with a band he met during his Study Abroad Program in Melbourne, Australia… and no coming home until he “made it” in the European industry. Since then, he has spent the last 9 years developing a unique sound with a focus on connecting with his audience through emotion, vulnerability and life experience.

Raz’s sound is relatable, yet unique. A curated and careful combo of Stadium Rock (think Imagine Dragons, Coldplay, 30 Seconds to Mars) and conscious Hip-Hop (think Knaan, Lupe Fiasco, Lauryn Hill, Talib Kweli) opens the doors to a new sound that is both stadium-worthy and lyrically intimate, dubbed “Stadium Hip-Hop” from the heart. Raz delivers large, energetic and passionate music, while somehow finding a way to leave you feeling like you just had one of those long, heartfelt conversations over coffee; where time stood still but also flew by all at once.

Recently making waves in Toronto, Raz has written with Yusuf Islam (Cat Stevens) and released a collaboration with Isam B of acclaimed Denmark group Outlandish, which garnered international attention racking up over 135,000 YouTube views and over 70,000 streams on Spotify. Within the last two years alone he has opened for Brother Ali, Mo Amer, Hasan Minhaj, Shawn Hook and Mustafa The Poet.

His latest single “Be Okay” dropped on September 25 and is now streaming on all platforms alongside a heartwarming and nostalgic music video. “Be Okay” is an ode to Summer and a reminder that even though it’s been a tough year, we can always look to nature and each other to get through it together. Check out “Be Okay” on YouTube and your favourite streaming platform and keep an eye on Raz – he’s shaping up to be that artist you wish you found first. 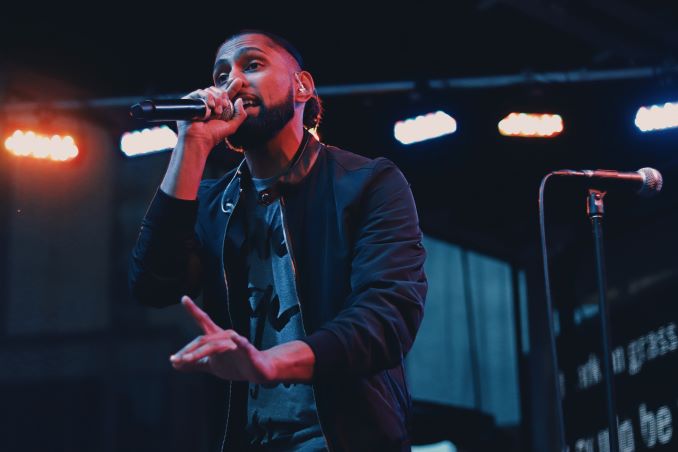 Souk Tabule in the Canary District – go check it out!

If I have to pick one, The Fugees. Honourable mentions to Coldplay, Oasis and The Fray✊

“Before He Cheats” by Carrie Underwood… everytime I hear that Louisville Slugger lyric I HAVE to play the song so I can sing along.

A good latte☕ some push-ups and stretches to get the energy up, short prayer, handshake with the BFF Darien Hafiz, hit the stage.

I have to go with two; TOBi and also a friend of mine who I admire and have had the privilege of performing with, Mustafa the Poet.

Pasta from Terroni, hands down🤘

Night Owl without a doubt🦉

Having traveled and performed quite a bit overseas, I gotta go with the Road

I am half Trini and half Guyanese… can you guess? 🤣 I’d disappoint every West Indian from here to Trinidad if I picked Swiss Chalet, just saying.

My latest single “Be Okay” just dropped on September 25. Check it out on YouTube and your favourite streaming platform! My next single is set for release at the end of November and you can follow me on instagram @razmusic.co for updates on my upcoming shows and debut album!