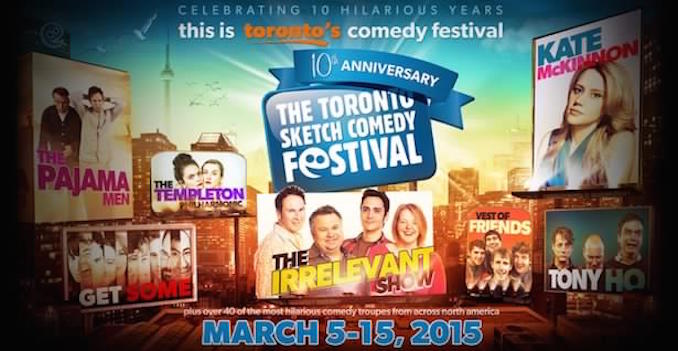 They’ve been proving it for a decade now – Toronto is home to the sketchiest people in Canada. If we’re being honest, some of the sketchiest in the world live right here in this city.

TORONTO SKETCHFEST celebrates a decade of the world’s best scripted comedy. 10 years of hilarious, and further indisputable evidence that Toronto IS the best!

T.O Sketchfest is set to celebrate this milestone with a massive 2015 line-up, March 5 to 15.

Like who… Who’s performing? Is that what you’re asking?

Oh geez, I dunno… how about a little someone named KATE McKINNON! Oh you know, from a little comedy institution that just hit 40 years on NBC, what’s it called… SNL? Ring any bells?? Oh, and if you were on this thing called THE INTERNET recently (yes, the same one you’re reading this article on) you might have also heard some buzz (if you knew where to look, its been kept pretty hush hush) that Kate McKinnon is one of the Sketch phenoms hitting the screen in the upcoming Ghost Bustersreboot. Yup, so she’s kinda doing pretty alright for herself. And she’s coming here! To the 10th annual festival de la Sketchness.

Word on the street is that this is what you can expect from Kate McKinnon’s Canada-bound solo show… and by ‘word on the street’ I of course mean a Press Release that was sent to us very traditionally:

McKinnon’s live show will combine stand-up, character pieces and video segments for an unforgettable evening with one of comedy’s finest sketch performers.

CBC Radio’s hit IRRELEVANT SHOW is hitting the stage again too and joining in the hilare! After a haymaker debut at last year’s festival.

So, already that’s like kinda stacked, right? I mean, you’d probably be interested in those shows already, right? We figured you’d be into it. We know our TG Comedy readers are a super sketchy bunch (and no, I’m not letting up on the pun)

The renowned duo PAJAMA MEN are returning to the Sketchfest stage for the first time in 9 years! Full circle, you guys.

Described as “comedy’s Velvet Underground” by the Guardian UK (sans the ‘doing speed on-stage’ part, we live in different times than Lou & company did) They’ve inspired a generation of upcoming sketch performers across the globe, and they’ll probably spark another cult following here while they’re at it! They’re a festival favorite wherever they go, and you can find out for yourself with 4 headlining shows at the Theatre Centre!

That’s all of course just a small sampling of what to expect at the Sketchiest of all festivals. With some big surprises, and 10 days of sketch comedy at venues across the city. This is, after all, Canada’s comedy capital!

And after a decade of doing this, it’s safe to say they’re on a pretty good roll.

Single tickets $15-$39 plus taxes and fees
Festival Pass: $75 (valid for all shows)
www.torontosketchfest.com

Comedy Records In The Punchline State

When Comedy Records first came together a few years ago, the idea was (and still is) simple. A collective of […]