I spent March 3rd 2015 with SWAT Wildlife Animal Control.  For me the workday began at 7:45 am, but I could see Derick and his wife Patty were already at their desks when I arrived at their office on St. Clarens Ave, near Bloor and Lansdowne in Toronto.  Derick met me at the door, and looked at his watch to show how much he appreciated me being right on time. After a quick handshake and a brief hello, we got into one of three waiting SWAT Wildlife company vehicles. It was still dark, cold and the snow was crunchy.

CBC Metro Morning played on the radio as the sun crept over the buildings. Before we got started, with the truck idling, Derick loaded something into the back. Then Patty appeared and put a hot drink in his hands before they kissed goodbye for the day.

Our first call was on the other side of town, and so Derick and I had lots of time to chat. He looked especially satisfied when he announced to me that it was a return client, a satisfied customer now calling back three years later. Patty includes that information in the paperwork; she ticks boxes for a return, a referral, or a new customer.  After ten years of running his own enterprise, Derick knows the value of his Rolodex, and the cost of acquiring new business.

“What’s the emergency?” I ask.
“Noises in the attic”, he replies, sipping his coffee.
“Is that what it says?”
“Noises in the attic or walls is the most common symptom of an animal occupant.” Derick reports, and continues, ‘Next is seeing the damage, torn shingles, litter and rubbish, feces, and smell. Patty is good at recognizing a real animal call from a fantasy call on the phone.”

Unable to resist that I ask, ‘What’s a fantasy call?,’ and Derick answers automatically, acting the voice of the panicked homeowner, “There’s a snake in my backyard, or, ooh help there’s trash all over the lawn.” when he laughed, I came to understand its a fantasy only because the animal is long gone from the incident scene.

Minutes later we arrived at the troubled home, and I watched Derick meet the property owner and listen to her complaint, “There’s a rustling in the attic that can only be a wild animal.”

‘Its a squirrel’, says Derick the minute we get outside.

Derick has been doing this for over ten years, and although no two days are ever the same on this job, he sees patterns in accordance with the seasons and the weather. As he took a long light extension ladder off his truck, he gave me some more facts.

Noises in the attic at this time of year means a squirrel, or possibly a bird is getting in out of the cold somewhere. While its conceivable that this could be a raccoon (because they are excellent climbers), it isn’t at all likely. Raccoons are not active in cold weather while squirrels are quite comfortable in snow and ice conditions. Strangely though, the squirrels that roam about in the snow seem to be able to sense heat gaps in houses as weaknesses to exploit.

As he fetches the ladder from his truck, Derick reflects on raccoons. He remembers how Rob Ford went on the record in Aug 2014 ranting that the raccoon population was exploding in Toronto, but the Mayor had no data to support that statement. City workers respond to the same number of calls, (about 5000 each year) to remove dead raccoon carcasses from public streets. The number hasn’t changed in a decade.

Raccoons have adapted well to city life and usually have a few different ‘homes’ in a five block radius. Their den sites include blocked drainage pipes, hollow trees, abandon groundhog dens, chimneys, garages, under and inside sheds, attics, porches and under decks. Raccoons are omnivores. They can feed on grubs, insects, small rodents and other small animals, eggs, fleshy fruits (like grapes), nuts and vegetables (like corn). They will also eat from garbage and compost bins. Its a fact that city-born raccoons do a lot better than their country cousins, because of the availability of high calorie foods and the absence of natural predators.

SWAT Wildlife Life does not destroy the animals it collects. No animal control operation is allowed to destroy wildlife in the City of Toronto. And they are not permitted to transport the creatures out of the city either. Like everyone else in Wildlife Control industry, they run a catch and release program which means they must educate homeowners on preventive strategies, like how to build and maintain animal proof homes and garages. 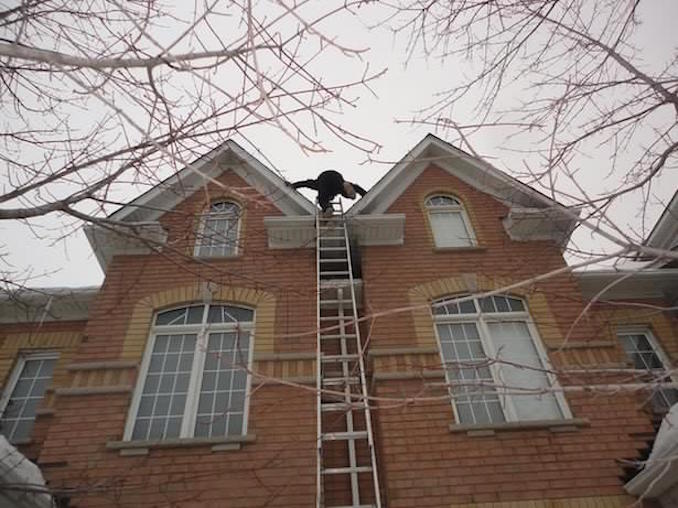 Derick climbs the ladder and soon spots the hole in the fascia boards where the squirrel got into the townhouses attics.

And unfortunately for the home owner, the entrance hole is on their neighbour’s side of the building.

Now these two families will have to work together and cooperate to catch this critter and create preventative strategies that can quell any future squirrel infestations, and this is just one of the many interesting subplots in Derick’s daily life.

He warns the homeowner that she needs to get rid of this animal before it causes extensive damage; it’s probably a female, and will have a litter of young in a few weeks, which is another reason it was seeking a safe nesting place.

Inside the house, Derick puts on a special breathing apparatus to filter contaminants from the air. 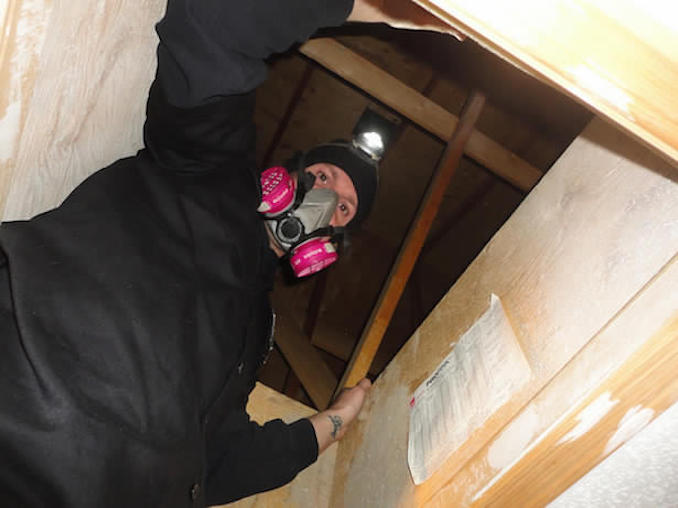 Derick’s strategy is to mount a one-way exclusion door on the primary entry/exit hole. And then once the squirrels are out he’ll seal up the final entry hole with steel so no new squirrels can chew in again. You can read more about how SWAT removes squirrels from buildings on the website.

SWAT Wildlife Called to Remove a Skunk in Scarborough

After a quick lunch, Derick got a phone call from Patty and a text message with another address. It was an urgent call, the most desperate appeal to catch and remove an animal you could ever imagine happening in Toronto in the middle of winter. It was a skunk call.

Turning off the expressway, we used the vehicle’s direction finder computer to locate the property of an elderly couple who met us in their driveway and confirmed their emergency.  There was a skunk under their back porch. The older man swore that he’d seen the creature with own eyes, and they were now very worried for their pet. Derick got a little closer and nodded, taking it all in. Indeed it was a skunk. How did we know? We could smell it. 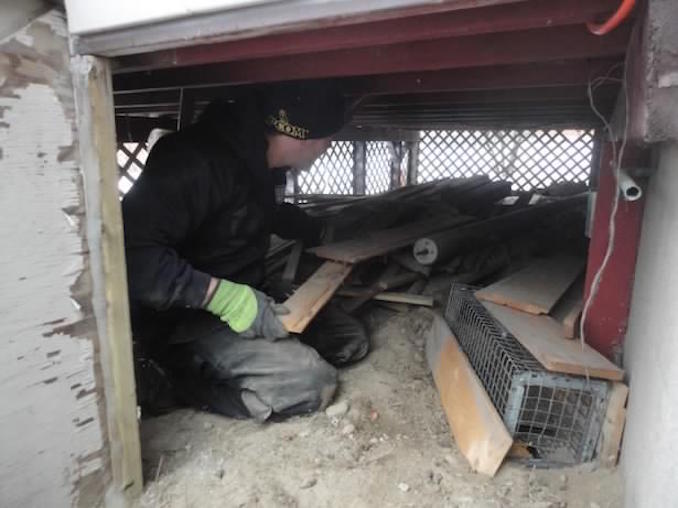 The homeowner had already removed the trellis and the snow from around this section of his back porch, beside his back steps. Peering inside the crawl space however it became clear that there was still a pile of old boards that needed to be shifted to reveal the rodent’s habitat hole. Skunks are burrowing animals.

Like raccoons, skunks are also omnivorous; they feed on grubs, insects, small rodents, carrion, fruits and vegetables. Here in Ontario, skunks breed from February to March. After that their gestation period is eight weeks after which time the female produces four to seven young skunks which are usually independent by mid-summer. Skunks are active all year long but may be dormant during periods of extended cold. They are attracted to live in exactly these kinds of spaces, a hole under a woodpile under a back porch is a near perfect scenario for this animal.

The SWAT approach is to trap the animal and then release it back into a neighborhood a few blocks away, using the time to repair the porch’s integrity, fill in the habitat hole, and make the trellis around this back porch impermeable to another animal penetration.

The best way to catch this animal is to trap it, and peanut butter is Derick’s the bait of choice because its cheap and still pungent even when frozen solid in the winter ice. 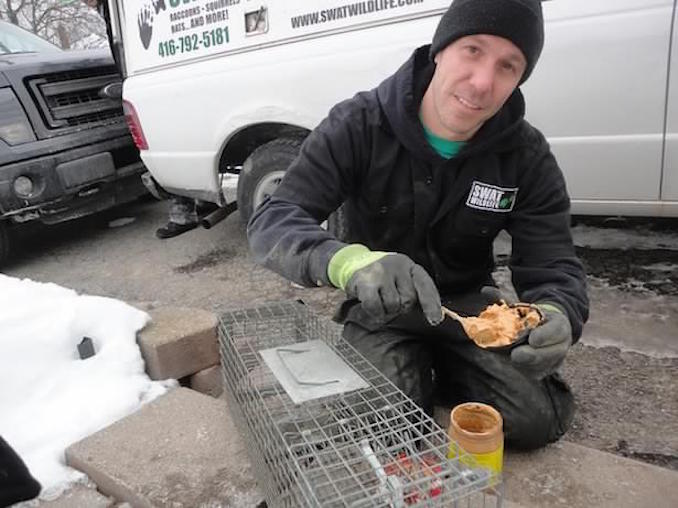 Swat Wildlife website goes into some detail about the art of skunk removal in Toronto, and lists lots of good information about skunks, including their colouring at various times of the year, which how most common fur colour is black and white, some skunks are brown or grey, and a few are cream-coloured. All skunks are striped, even from birth. They may have a single thick stripe across back and tail, two thinner stripes, or a series of white spots and broken stripes (in the case of the spotted skunk). Some also have stripes on their legs.

Skunks are one of the most common carriers of rabies, in addition to other harmful diseases. If you see or suspect that a skunk is living around your house, avoid contact with it and call the professionals to humanely remove them from the area.

When work has been completed and materials installed, SWAT offers a one year written guarantee on all of its work,

I will ask Derick for a picture of a skunk in the cage to post here by way of a conclusion.. That’s how this story will end. The very next morning Derick will return to this trap site and remove the skunk in the cage. He will drive a few blocks away and release the skunk, and then return and repair the property. And for SWAT Wildlife, who knows what other animals tomorrow will bring?